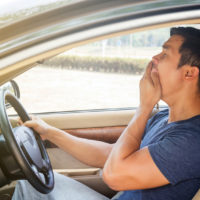 The more that scientists publish research on the effects of sleep deprivation, the more conclusively this research shows how critical sleep is for proper brain functioning. This research also comes at a time when many experts believe that there is a crisis of sleep deprivation in the US, with few Americans getting an amount of sleep that could be considered sufficient to support optimal physical and cognitive well-being. In one critical example of the dangers that can be caused by drowsiness, the AAA Foundation for Traffic Safety has released a study showing how often drowsiness plays a role in car accidents. Read on to learn about the results of the study, and contact a knowledgeable southern California personal injury lawyer for help if you’ve been injured in a Los Angeles-area car crash.

Study monitors drivers while they’re behind the wheel

Finding out whether a driver was nodding off prior to a crash has historically been difficult to discover. Even a forthcoming driver might not realize that they were nodding off when they caused an accident, and there is no way for law enforcement to test conclusively for drowsiness. Official federal statistics has thus estimated the rate of drowsy driving-caused crashes to be between 1% and 2%. The new study shows the danger to be far greater.

The recently-released research was based on a longitudinal study that used video footage taken of over 3,000 drivers located across the US over the course of three years. For this study, researchers looked specifically at video footage taken of drivers in the six seconds before they were involved in an accident. The researchers looked for signs of drowsiness, measured by how long drivers’ eyes were closed during that six-second period.

Substantial share of all crashes involve a drowsy driver

The AAA Foundation researchers learned that up to 9.6% of all drivers who were involved in an accident had shown signs of drowsiness in the moments immediately preceding the crash. Among accidents that resulted in major property damage or physical injuries, the rate of drowsy drivers was over 10%. The head of research and advocacy for the AAA Foundation, Jake Nelson, framed the results of the study this way: “As many Americans struggle to balance their busy schedules, missing a few hours of sleep each day can often seem harmless. But missing just 2 to 3 hours of sleep can more than quadruple your risk for a crash, which is the equivalent of driving drunk.” Victims of drowsy drivers have a claim against these drivers for carelessly choosing to get and remain behind the wheel despite realizing that they were not safe to drive.

If you or someone you love has been hurt in a Southern California crash with a drowsy driver, contact the knowledgeable and dedicated Claremont personal injury lawyers at Blasser Law for a consultation, at 877-927-2181.