Can a Parent With Joint Custody Take a Child Out of California? 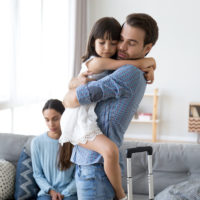 Divorce can sometimes be, unfortunately, the gift that keeps on giving. Custody and child support arrangements cannot always predict life changes that happen years after a divorce is finalized. If you get a job offer in a different state and want to move your child with you, can you do so? Read on for an explanation of your options for relocating with shared children following a divorce, and contact a seasoned Claremont child custody attorney if you are facing divorce or other family law matters in Los Angeles or the San Gabriel Valley.

Getting consent from the other parent

If you have sole legal custody of your child, then there should be no issue with you taking the child out of state. If, however, you have shared custody over the kids, then the issue is more complicated. Custodial parents have the right to change residences or move neighborhoods as long as the move will not harm the child’s best interests, and the moving parent gives at least 45 days notice to the nonmoving parent. If the other parent consents, then the move is permitted. You may choose to work out a new custody or visitation arrangement, or the other parent may choose to move as well.

The nonmoving parent can, however, object to the move. If you have joint custody and intend to move out of state, there is a good chance that your co-parent will not consent. Joint custody orders often will stipulate that one parent cannot move with the child without a written agreement or further court order. A move out of state will almost certainly make the current custody or visitation schedule untenable.

Getting a court order

If your ex-spouse or other co-parent does not consent to your move, you can still petition a family law court for the right to move with your child. The judge will evaluate whether a change in custody is needed based on the best interests of the child. If you have sole legal custody, then the burden is on the non-moving parent to show harm to the child. In a joint custody situation, the evaluation is more difficult. California courts will consider the following in a relocation hearing:

The moving party should be aware that the court may assume that the moving parent will move regardless of whether their petition to bring the child is granted. As a result, the court may issue an order granting sole custody to the nonmoving parent, rather than maintaining the status quo. A dedicated family law attorney can help you ensure that your petition for a move does not leave you with less custody than you started with.

For seasoned and knowledgeable legal help with your California custody dispute or Los Angeles area divorce, contact the Claremont offices of Blasser Law at 877-927-2181.