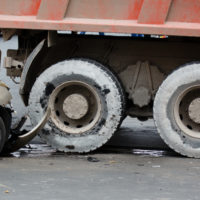 The US economy is dependent on ground transportation and shipping by large container trucks, but these trucks can do massive amounts of damage when involved in a crash with smaller passenger vehicles. The US Senate is currently considering a bill that would require large trucks to carry greater protection against deadly accidents between passenger vehicles and tractor-trailers. Read on to learn more about these accidents, and contact a dedicated San Gabriel Valley truck accident lawyer if you’ve been injured in a truck accident.

In over 80% of fatal accidents between passenger vehicles and large commercial trucks, it’s the occupants of the passenger vehicles who suffer fatal injuries. One of the deadliest types of accident that can occur between a car and a tractor-trailer or semi-truck is an underride accident. These types of collisions occur when a passenger vehicle crashes into the rear, side, or front of a semi-truck. Without underride protection, cars can experience deadly damage to their passenger compartments, often causing the roof of the compartment to be torn off or the passenger compartment to be crushed, with serious consequences to the occupants of the vehicles.

Federal laws already include requirements that large commercial trucks use rear underride guard protections, which can prevent underride accidents when a passenger vehicle rear-ends a large truck. However, these guards aren’t always strong enough to fend off underride crashes. Additionally, studies by the Insurance Institute for Highway Safety (IIHS) show that many serious underride accidents are the result of cars colliding with the sides or front end of the truck, rather than the rear.

In response to these concerns about underride protection, the US Senate has taken up a bill that would increase the amount of protection against underride crashes that large trucks must use. The bill would require that rear underride guards be stronger and able to withstand a crash at higher speeds than guards meeting current standards. Large trucks would also need to use side and front-end underride guards. “With so many unpredictable accidents on the road, underride guards are an easy solution for protecting people and preventing them from dying when a car collides with a truck,” explained Sen. Kirsten Gillibrand, one of the bill’s sponsors.

If you or someone you love has been hurt in a major Southern California truck accident, then find out if you have a right to money damages by contacting the knowledgeable, dedicated, and effective Claremont personal injury lawyers at Blasser Law for a consultation, at 877-927-2181.