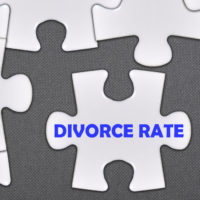 Workers in any profession face a threat of divorce, but statistics show that workers in certain fields are even more likely than others to experience the end of a marriage. Researchers have also found that income level and divorce rates are linked.

A statistician for the site Flowing Data calculated the divorce rate for the approximately-500 professions included in the US Census Bureau’s 2015 5-Year American Community Survey. Researcher Nathan Yau also compared the divorce rates according to average earning levels to examine whether income had a relationship to divorce rates.

Yau’s analysis revealed that careers in fields involving nightlife and travel seemed to result in the greatest number of divorces. The careers with the highest divorce rate were bartenders and gaming managers in casinos, each of which had a divorce rate of nearly 53%. For reference, the average nationwide divorce rate sits at about 41%. Flight attendants came in with the third-highest divorce rate at 51%. Dancers and choreographers had an average divorce rate of 47%, and 48% of massage therapists had been through a divorce. Telemarketers had a divorce rate of roughly 50%, and about 47% of licensed practical or vocational nurses had been divorced. Aside from fields where travel or nighttime work was involved, Yau found that the lower the average income of the profession, the more likely the members of that profession would be divorced.

Workers in science, medicine, and computers, on the other hand, had the lowest average divorce rates. About 19% of all physical scientists had been divorced, 21% of physical therapists, 22% of physicians, and 23% of dentists. The profession with the lowest divorce rate? Actuaries, who calculate risk for insurance companies—only 17% had been through a divorce.

Yau noted that the relationship between profession and divorce rate likely has more to do with the sort of person who is attracted to certain fields than the job itself. “If someone who is already a physician, quits and takes a job as a bartender or telemarketer, it doesn’t mean their chances of divorce changes. It probably says more about the person than anything else. Similarly, those with certain occupations tend to be from similar demographics, which then factors into how the individuals live their lives.”

If you’re considering divorce in Southern California and would like experienced, compassionate, and effective legal help to assist you, contact the Claremont family law attorneys at the Blasser Law Firm for a consultation, at 877-927-2181.