What You Need to Know about Whiplash 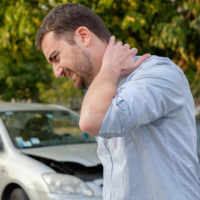 When you’re in a rear-end crash, the impact of the car behind you can cause serious damage to your body, and even result in chronic pain in certain cases. If you’ve been in an accident, it is important to learn about the possible effects of whiplash, and how to get help pursuing claims for your whiplash injuries. Read on for important information about whiplash injuries.

The term “whiplash” is not the medical name for a condition, but is instead an informal term used to describe the injuries resulting from cervical acceleration-deceleration trauma. This is trauma to the neck and spine from being abruptly pulled backward and rebounding forward. The quick back-and-forth movement can cause chips to form in the bones of the neck, as well as tears to neck tissues and ligaments.

The consequences of whiplash can be more severe in certain cases. For example, older people often suffer more serious consequences from incurring a whiplash injury than younger people. This is because the tendons and tissues are somewhat less elastic than in younger people, and so the violent whipping back and forth results in more damage, and can come with additional symptoms such as arthritis flare-ups in the neck and back. Car accident victims whose car headrests were not properly positioned, or those who were not wearing a seatbelt at the time of the crash, also run the risk of incurring more serious injuries.

Whiplash results most often from being rear-ended in a vehicle. That said, whiplash injuries can also result from engaging in high-intensity sports, including gymnastics, snowboarding, boxing, and tackle football.

The symptoms of whiplash can range across a spectrum, depending on the severity of the injury. Additionally, many whiplash symptoms are similar to those of other, more serious, conditions, such as concussions or other forms of traumatic brain injury. For that reason, it is critical to see a doctor after a car accident to get a full check-up and receive an accurate diagnosis. With that in mind, some of the most common symptoms of whiplash include:

Many insurers are reluctant to pay personal injury claims when an accident victim has not incurred expensive damage to their vehicle. Since whiplash injuries can result from low-damage crashes, this is often the discouraging result of whiplash victims’ insurance claims. For that reason, many whiplash victims find it necessary to secure the help of a skilled personal injury attorney, to ensure that they get the full value of their claims resulting from an accident.

If you need legal help after a California car accident, contact the knowledgeable, compassionate, and dedicated Claremont personal injury lawyers at Blasser Law for a consultation, at 877-927-2181.